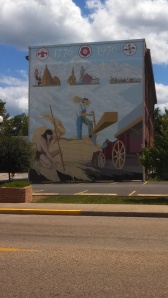 07/27/13 by Sojotales
A beautiful day and the open road greeted my wife and I as we swung our legs over the motorcycle and went exploring. We didn’t have any specific destination in mind, but wound up seeing some beautiful countryside as we rode through Mascoutah and on towards Okawville. Before today we’d only been to Mascoutah to eat at the RoemerTopf German restaurant (which serves some wonderful varieties of schnitzel!) The town is small, but clean and well maintained; along the main road it even had a couple of artistic murals and some statues. A rearing horse was the first thing that caught our attention as we drove down the main street. The ride itself was the least of the blessings that God poured out on us as we continued down the road. We saw beautiful fields of corn rippling in the blowing wind, and children playing in the mud beside the river as we rode along.
We pulled into a gas station in Okawville to fill up the motorcycle’s tank. While I was pumping the gas I was witness to a blatant display of haughty disinterest followed in turn by the actions of an elderly gentleman who made me think of the story of the Good Samaritan.
A lady who was obviously from out of town pulled up in front of the service station looking for directions. She seemed frantic and lost; like she was in a hurry to get somewhere and was late. She practically ran into the convenience store, asked the clerk a question and then quickly walked out. She looked to the left as she exited the store and walked over to a man who had just pulled his car into a vacant parking space. I happened to be watching the man in the car as she approached him. His body language said, stay away from me; I’m not interested in anything you have to say; I’m trying to ignore you; go away! When she politely asked if he lived there in town he rolled his eyes and replied, “Yeah” with such a tone of disgust that my eyes and ears locked on the scene that I saw unfolding before me. The lady asked if he could tell her where a street was. The man sneered at her as he said, “no,” turned his head, and went back to eating his ice cream cone as if the woman wasn’t still standing right next to him. It was sad to see the woman’s shoulders slump at the man’s obvious rejection as she turned away from him.
Luckily for her there was a local gentleman at the gas pump next to me who had just finished filling his car. He had obviously witnessed this disquieting scene unfold just as I had. He could have just gotten in his car and driven away leaving the woman there–hurt and still lost–standing next to her van. Thankfully he didn’t, and I was blessed as I watched this elderly gentleman step quickly towards the dejected woman. I could barely hear him as he asked in his gentle, peaceful voice, “What street were you looking for?” The woman hesitated for a moment before she told him the name of the street; it was obvious that she’d been hurt by the sneering man’s behavior and was now distrustful of any stranger. Patiently the elderly gentleman waited until she lifted her head and allowed her eyes to meet his gaze, then he pointed and said, “Come on, that’s my car over there. Just follow me and I’ll show you where it is.”
It is interesting to note that while the elderly gentleman was talking to the lost woman the sneering man turned his head to watch them. When she needed help, he was rude to her, ignored her and pretended disinterest; but when someone else stepped forward to help her she suddenly had his full attention. He just shook his head in obvious disgust as he watched the two of them drive out of the gas station and turn onto the main street.
So often in our lives Satan uses people around us to try to make us stumble off of the path that leads to Jesus. This poor woman went from being anxious about being lost, to sad and dejected after just a few words and actions from the sneering man. On the other hand God offers us the Fruit of the Spirit; Love, Joy, Peace, Patience, Kindness, Generosity, Faithfulness, Gentleness, and Self-Control. During a period of time that was probably less than three minutes long, I was blessed to see this elderly gentleman exhibit such an amazingly positive example of all of these Fruits of the Spirit.
How often are the actions of the Good Samaritans around us even recognized for what they are? They are examples of Christ working through us. We should always be ready to step forward in this Spiritual battle to help others overcome the wiles of the Devil. The elderly gentleman in this story did exactly that.
When have you witnessed someone showing Christ’s love as they battle against those who wish us evil?

Journey's along the road and Testimonies of God's grace and wisdom gained along the way.

The Art and Craft of Blogging

delivered directly to my computer monitor on an all too regular basis...